One of Ethiopia’s previous capitals, Gondar, is a stop on the historical tour route of Ethiopia and a city Cara and were finally able to visit last month. The Gonderine period was part of Ethiopia’s Solomonic empire and features its own distinctly stylized cross, typically circular with twelve mini cross points that represent each of the apostles (or at least that’s how the abbot at Debre Libanos explained it), which was what drew me. Cara was hooked on the idea of seeing a castle and the hundred angels adorning the roof of the church, Debre Birhan Selassie. 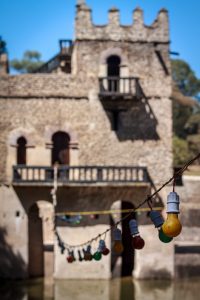 There is a castle in this post but this is not it.

Before going on about the trip, I know I have to address the Gondar / Gondor issue. Gondar, with an “A” (or an “E” sometimes, Amharic doesn’t use the Latin alphabet), is a city in Ethiopia while Gondor, with an “O” is a kingdom in Middle Earth, often confused with its capital, Minas Tirith. I think the confusion comes from the phrase “Gondor calls for aid” that the steward of Minas Tirith famously ignored leading to the battle of the Pelennor Fields, which is an interesting parallel to the earlier battle on the plain of Dagorlad but that is probably enough of a digression.

If it piques your interest, there are interesting comparisons (besides the names) between Gondar, the “Camelot of Africa” and Gondor’s capital. There’s the Citadel of Minas Tirith, mirrored in the castle complex of Fasil Ghebbi. Meanwhile, Tolkien’s Gondor, part of a Christian allegory, is the setting of a story of kin-strife and betrayal, while Ethiopia’s Gondar was the seat of a Christian empire and its history includes a father’s conversion to Catholicism, betrayal of his Orthodox subjects, and his son’s subsequent restitution and return to the faith. Sound familiar? Lastly, while I don’t want to overplay or underplay the conflicts in the region, we did have to delay visiting Gondar because the Regional Security Officer here discouraged travel due to an “increase of grenades in the region.”

That’s a warning that bears some unpacking and in light of this, Cara and I did have some concerns about the trip. However, as has been the case every time we’ve traveled around Ethiopia, we had an incredible visit to Gondar and experienced nothing more concerning than some scenes on the walls of Debre Birhan Selassie that could have been ripped out of Dante’s Inferno.

This isn’t even the scary wall. Pictured here is just a little warfare, possibly the Sudanese dervishes who attacked the church.

Upon arriving in Gondar and checking in at the Lodge du Chateau (a fitting name for a great hotel right next to the Royal Enclosure), we walked to the church, Debre Birhan Selassie to see the angels. 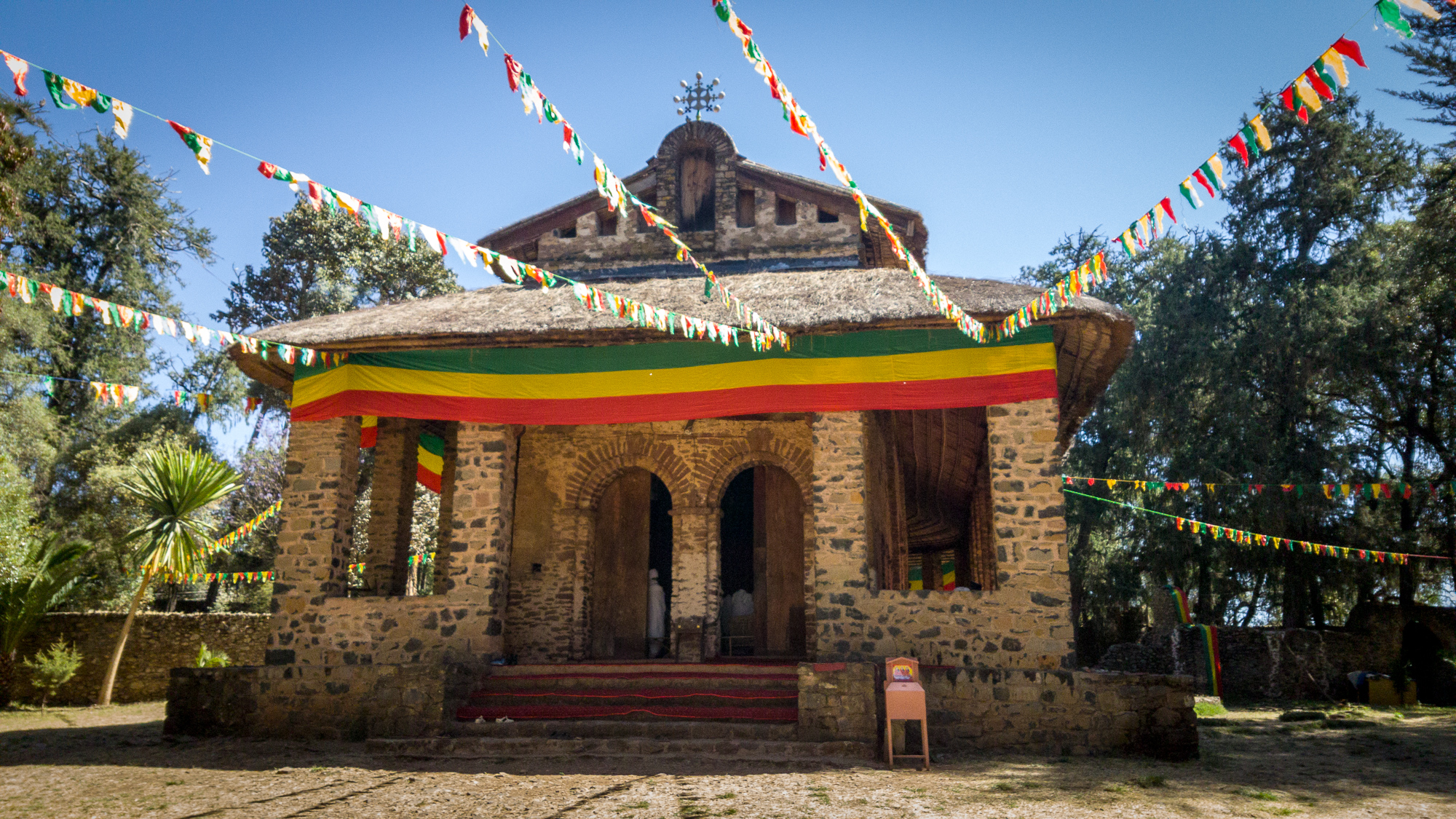 It took a couple circumambulations to get in, as we tried to locate the entrances. I’m still not sure we used the correct procedure but as pictured here, men seemed to go in the left door, women the right, and then there are separate exits further along the left and right hand walls, also one for each sex. Between chants, the whole building is sealed up tight but if you ever visit, don’t worry too much about timing. In Ethiopia, it’s either chant o’clock or ten minutes till. 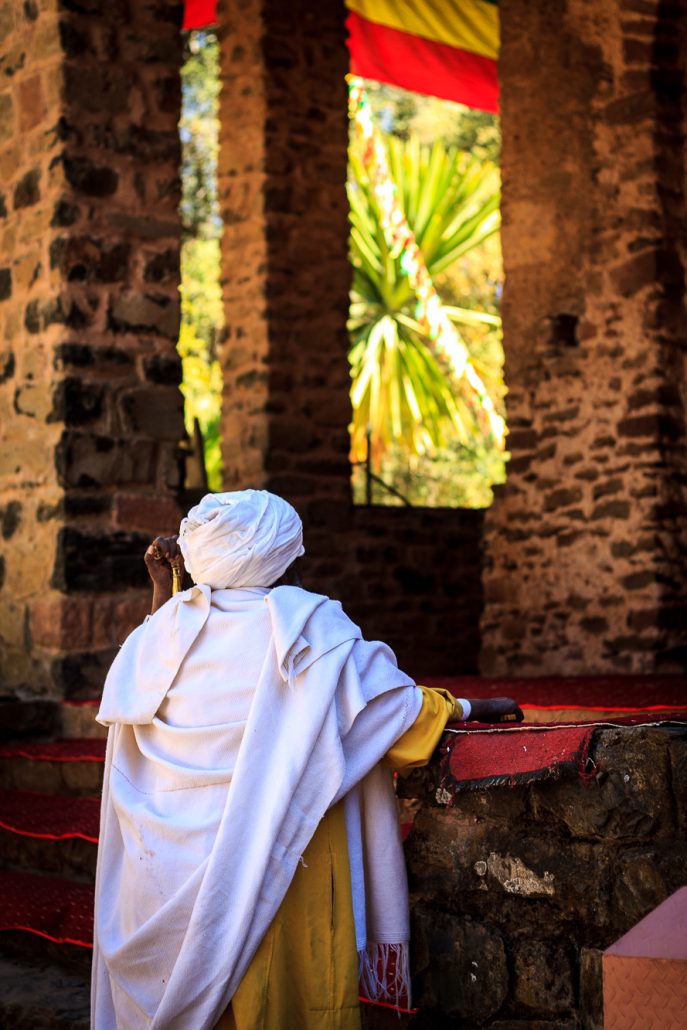 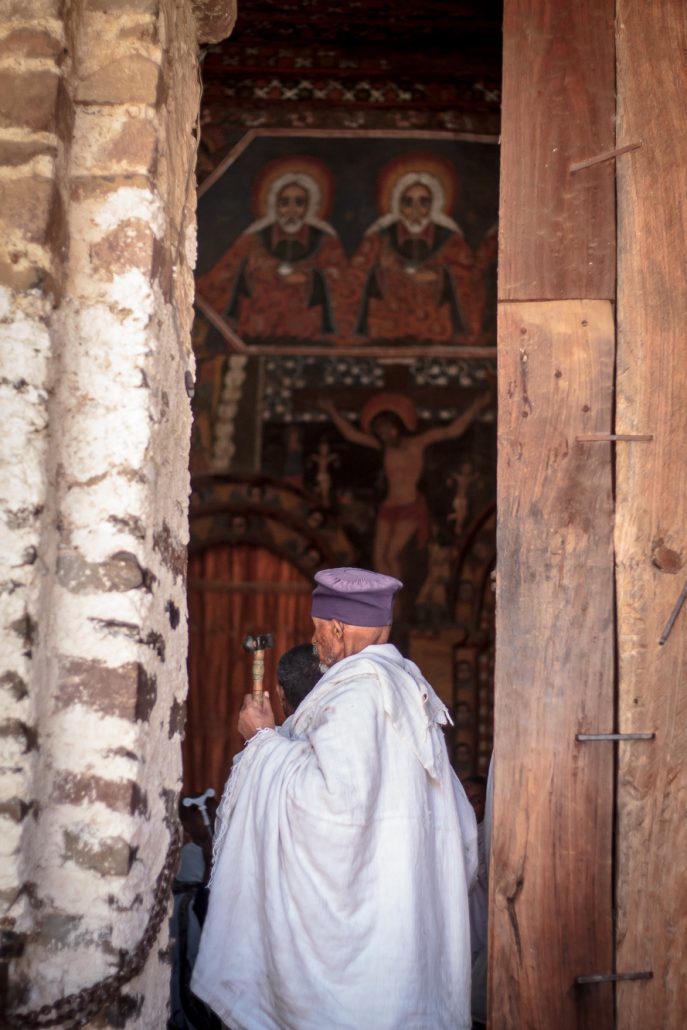 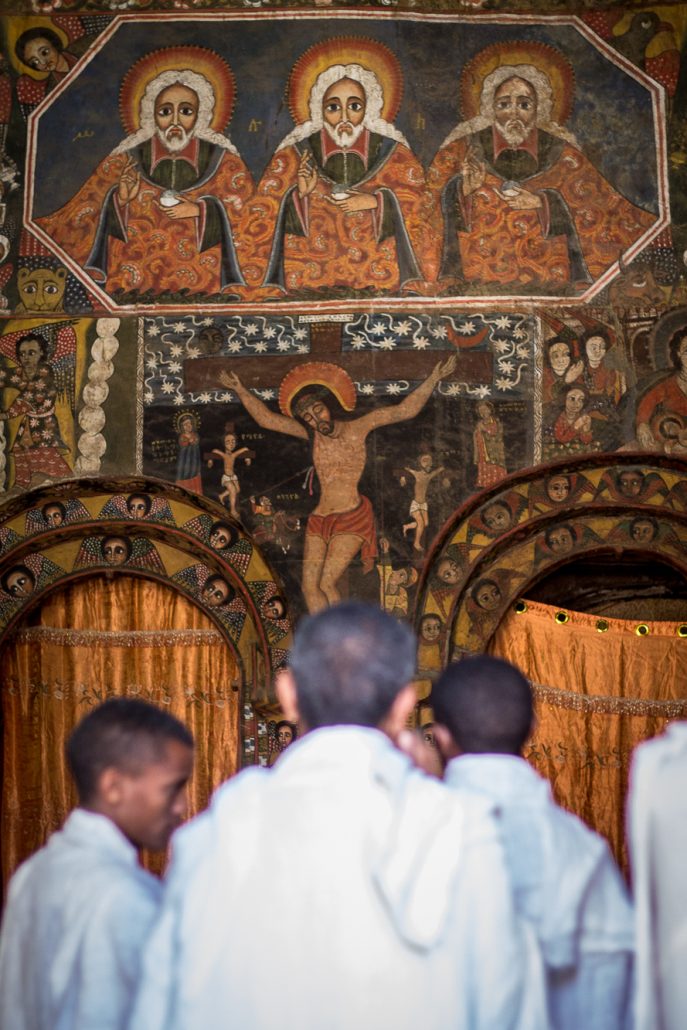 Entering the church was less than awe-inspiring, at first. But as more doors opened and the afternoon light spilled in, the paintings on the walls came to life. Pictured above are clergy entering the church (from the front, left door) and the Holy Trinity (Father, Son, and Holy Ghost) above the crucifixion of Jesus.

The art brings up a lot of questions, which I wish my Amharic was good enough to articulate. God represented as three pale guys is oddly surprising, even as I feel like I shouldn’t be surprised by the patriarchy and the paleness combined. Then there’s Jesus’ cry of “My God, why have you forsaken me?” in direct contrast with the presence of the three above him. And finally, the separation of the Son above and Jesus below. My, albeit limited, understanding of the original schism between Catholic and Orthodox churches is that it was theologically centered on the nature of Christ. The Roman Catholics (and the Lutherans later, the religion I grew up in) consider Christ to have two natures, God and Man, while the Ethiopian Orthodox church teaches that he has one nature, perfectly unifying humanity and divinity.

Maybe the painter knew all these passages and teachings and I missed hidden symbols or more overt imagery. This is certainly not a critique of the incredible church, but it made me even more grateful to the abbots at other churches, like St. Gabriel’s and Debre Libanos, whose English was better than my Amharic and seemingly always hovering nearby to answer questions. Speaking of hovering … 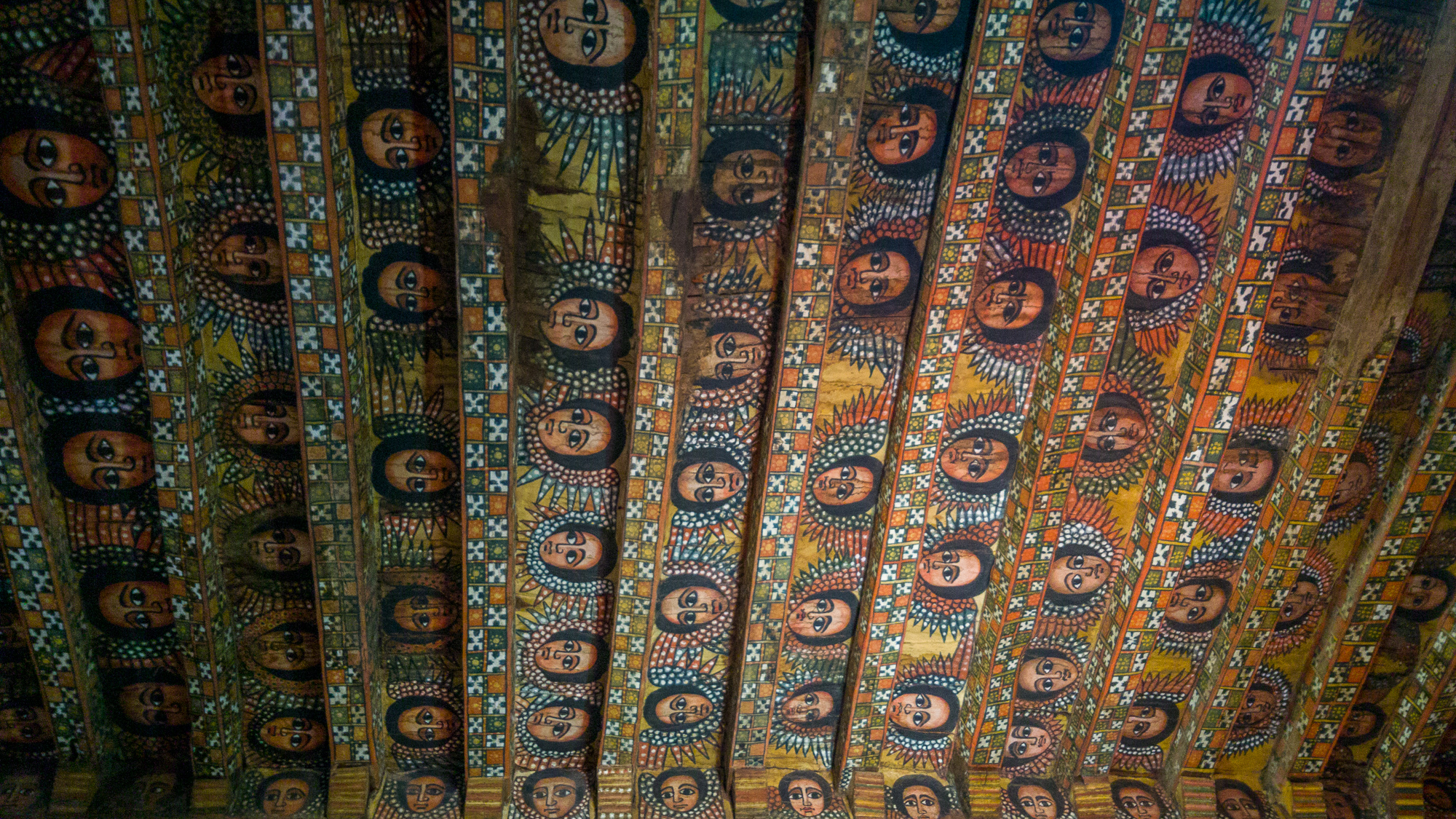 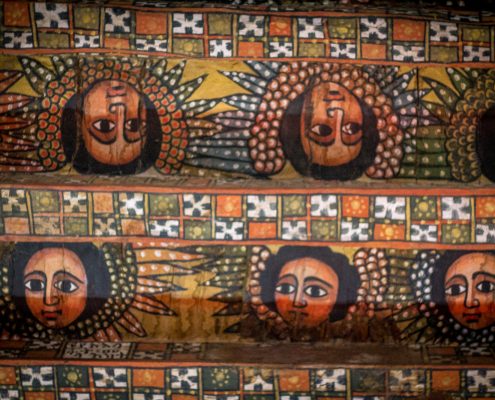 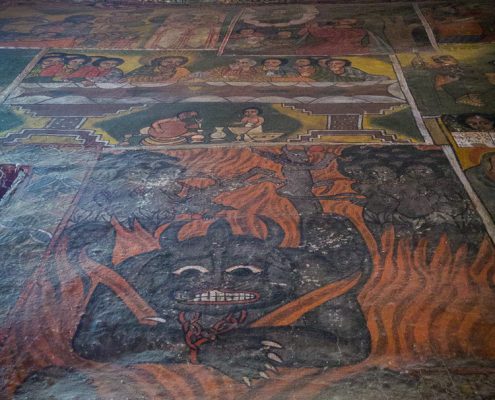 Once you get inside the church and look up, you’re greeted by one hundred and thirty-six angels peaking down between the rafters. Cara loved them, but I was more a fan of the infernal motifs along the walls. The best part, though, is how each of the angels has little differences in their faces and wing colors. Note the poor guys forever watching over hell, the disapproval clearly etched into their expressions.

As a heads up, if you are reading this for the castle, we saved it for the end of the trip, so you have my permission to skip ahead. If you want to follow our itinerary, though, it does build up nicely to the castle itself. After the church, we jumped into a tuktuk and visited Fasilides’ Bath. 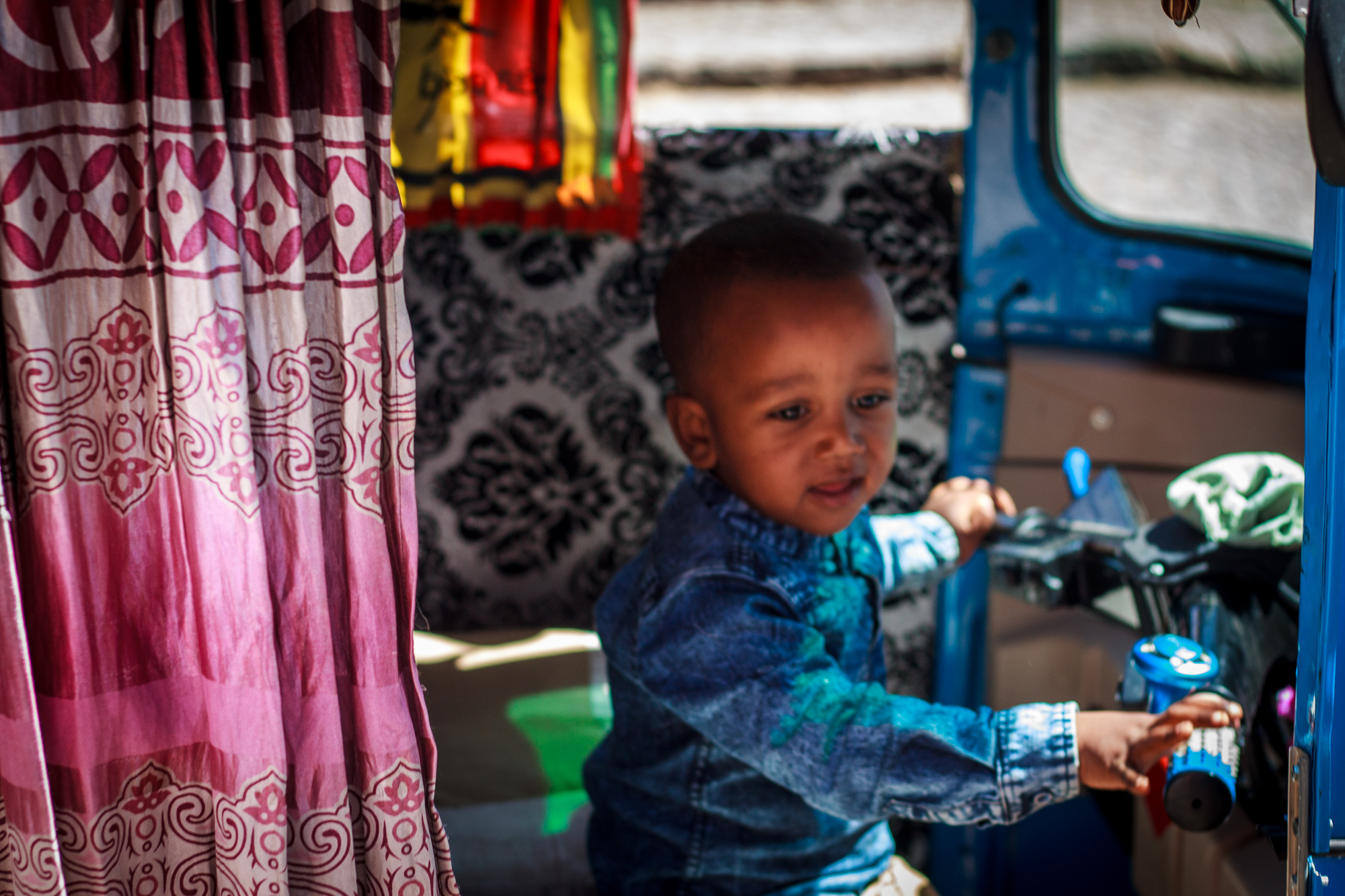 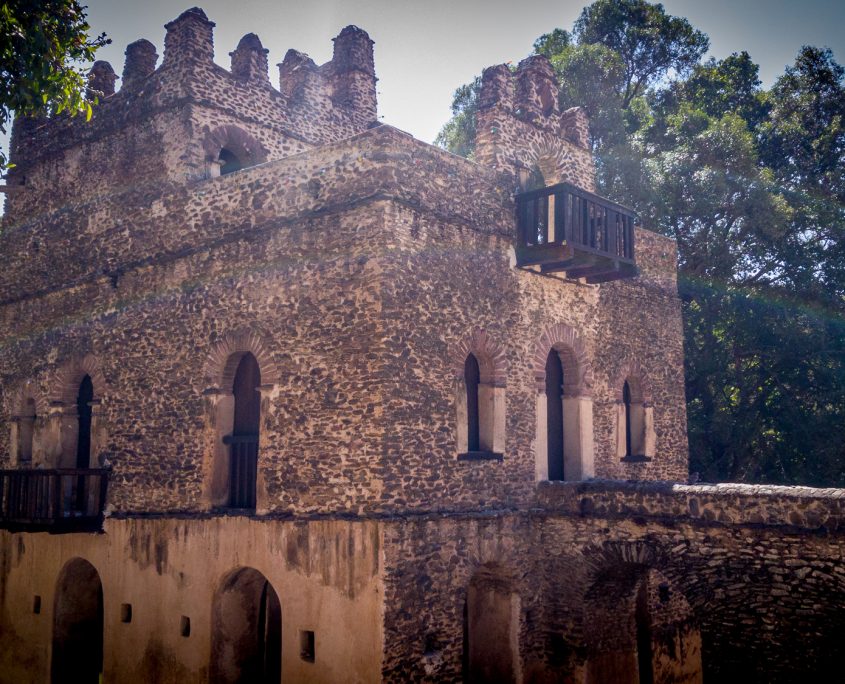 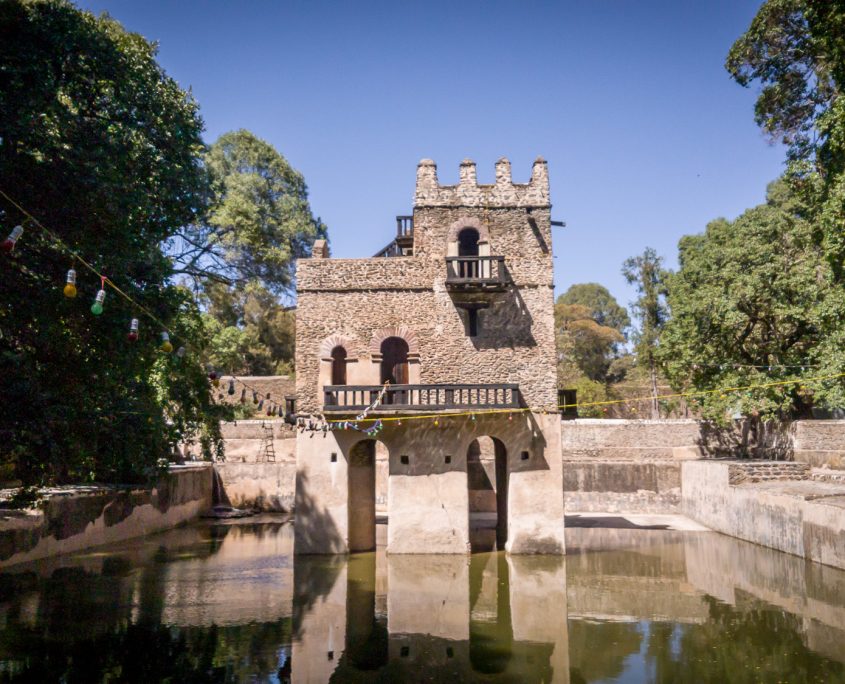 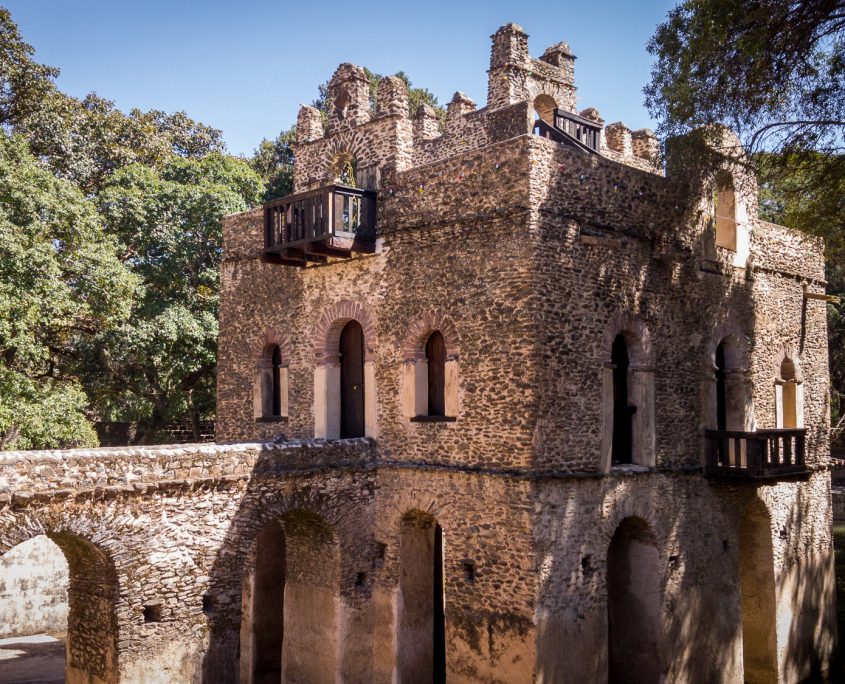 Now, I repeat, this is not the castle, but simply the bathhouse for Fasilides, one of the Gonderine emperors. He is considered the founder of Gondar, the son who returned the empire to the Orthodox faith, and began construction of the castle complex, Fasil Ghebbi.

The bath is the site of a huge Timkat celebration each year, which is Epiphany for the Ethiopian Orthodox church. As part of the celebration, a giant crowd of the faithful get into the bath’s waters. We found out we were just missing the crowds from this year’s Timkat, which I still have mixed feelings about, but I have a lot of loyalty to my neighborhood church in Addis and would have been sad to miss them rolling out the red carpets for the holiday (which they literally do).

The area was incredibly relaxing but we were told of an even more peaceful spot, Kusquam, which we headed to next. 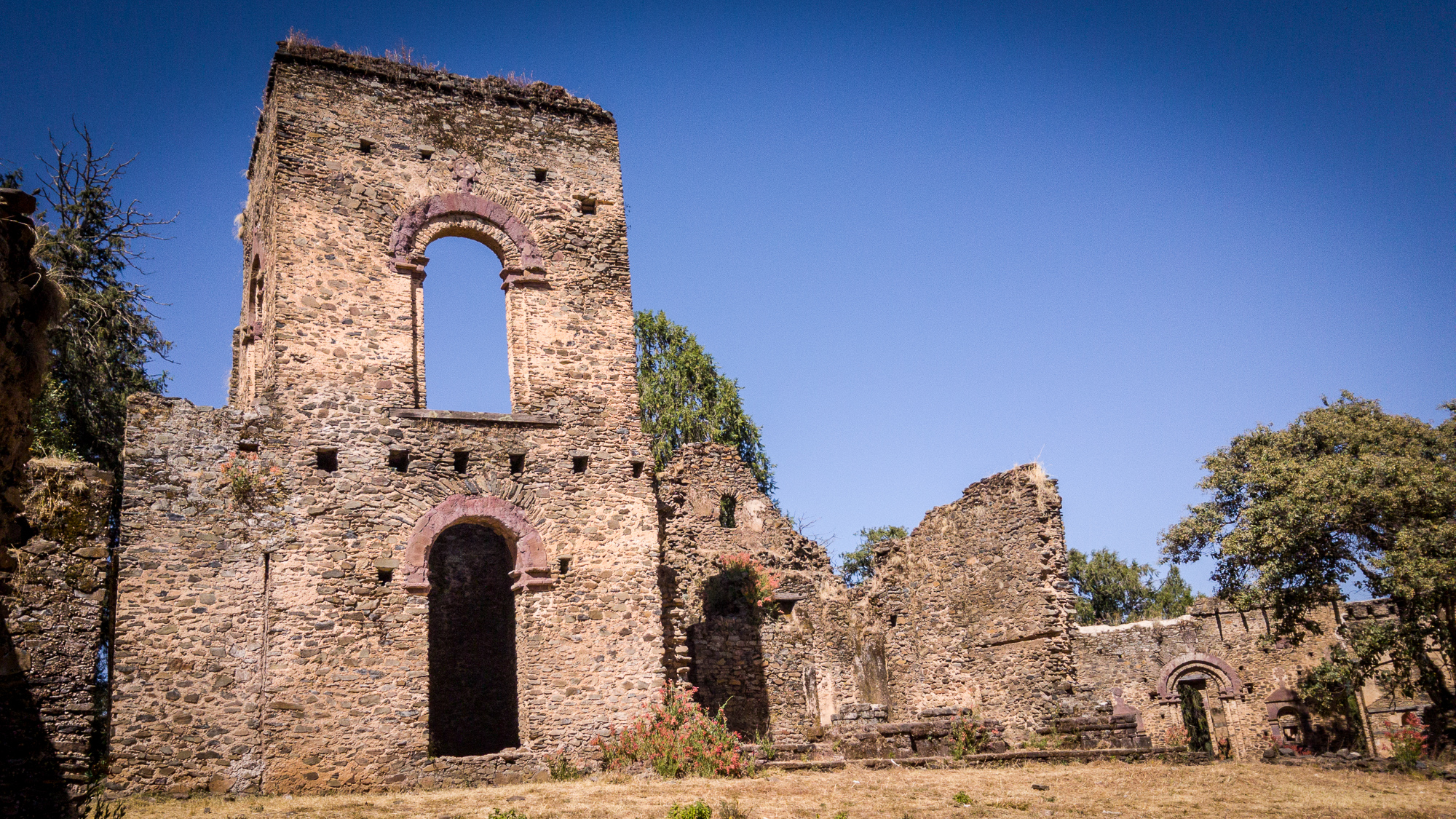 I repeat, this is not THE castle, yet. However, I did notice while reading up on Gondar that virtually all of these sites were called a castle by one guide book or another. If you look at the capstones for the arches, you’ll see the classic Gonderine cross. 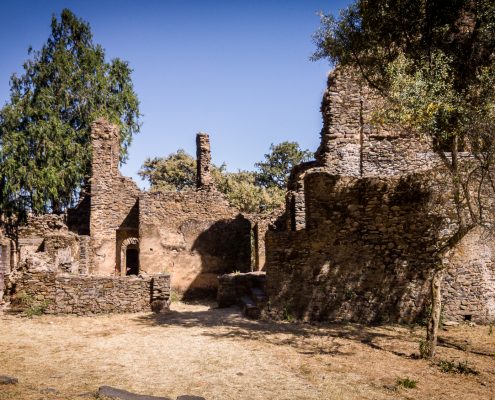 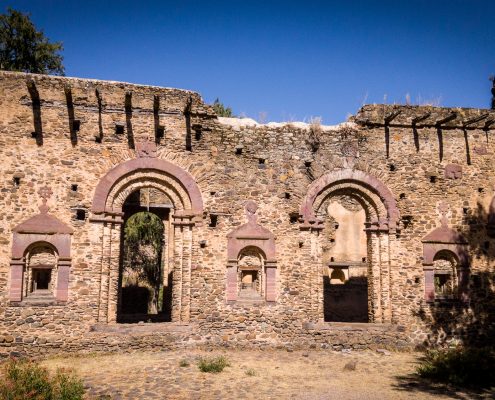 Overlooking Gondar, this site was built by Empress Mentewab and is sometimes referred to as her residence, which I think is why some people call it a castle, even though she also built one of the castles in the complex at Fasil Ghebbi. Maybe it’s splitting hairs (is there a difference between a castle and a royal residence?) but at the center of Kusquam is a still-functioning church and among the ruins are small houses for theology students (monks? abbots-in-training? I still have a few things to learn).

At last, though, we walked down a very rocky but direct path to the main road, hailed another tuktuk (speaking of learning, what are these called when you’re not in Southeast Asia?) and made our way to Fasil Ghebbi, aka the Royal Enclosure, aka the castles you’ve been waiting for. 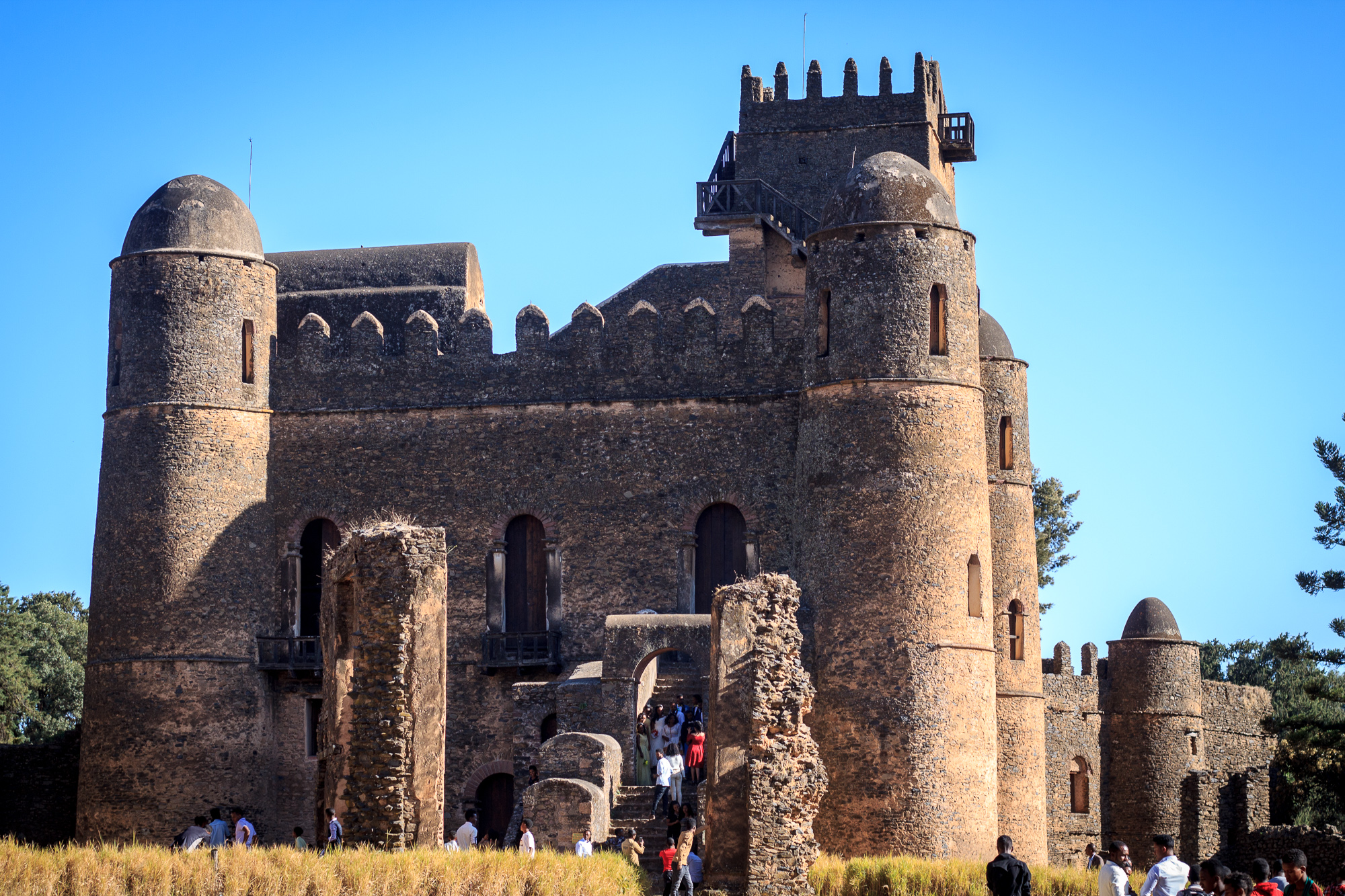 The complex stretches across a large part of the city, so no single photo captures how impressive the complex is. 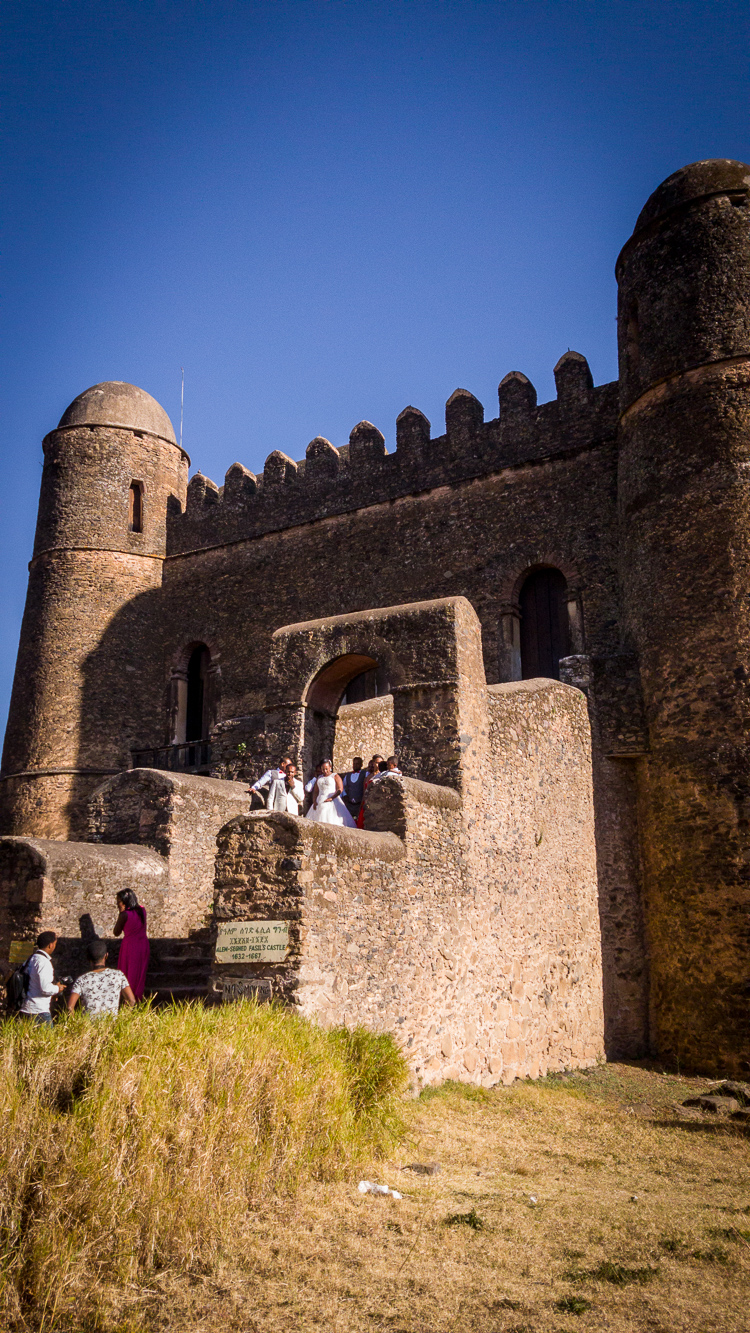 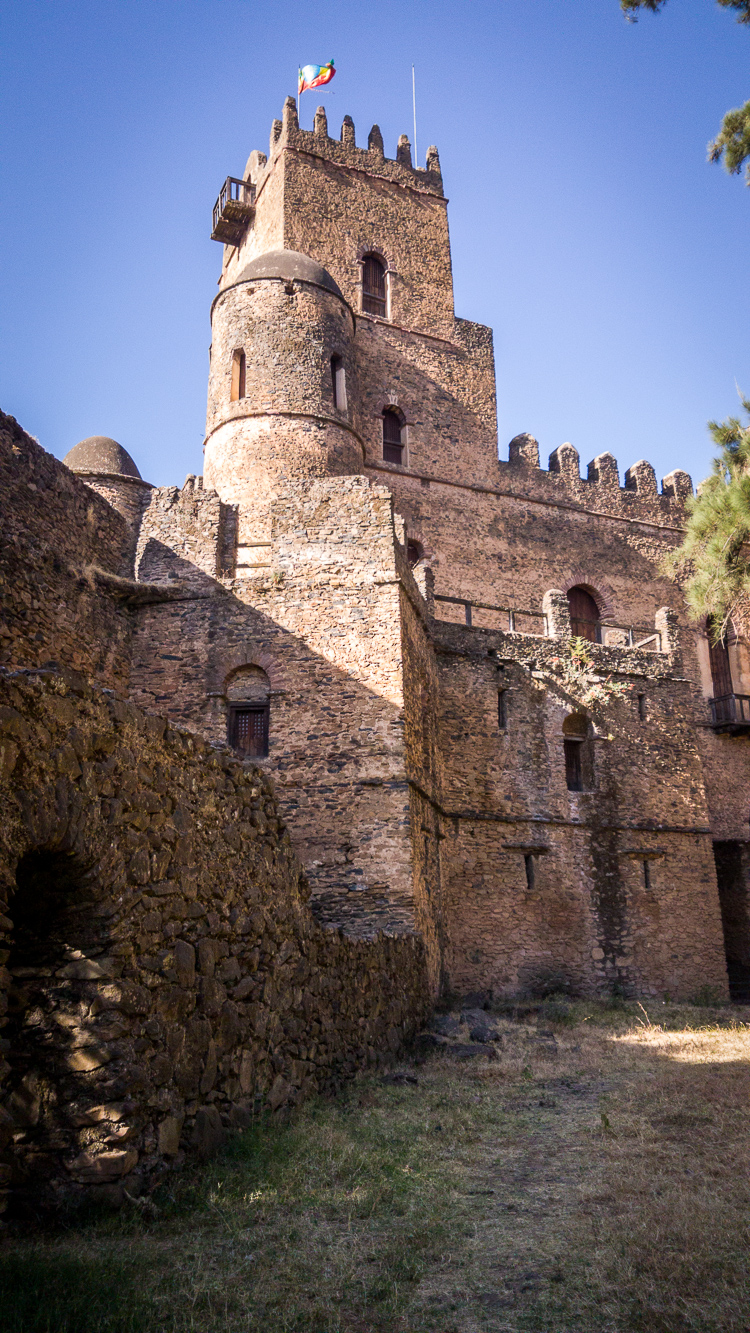 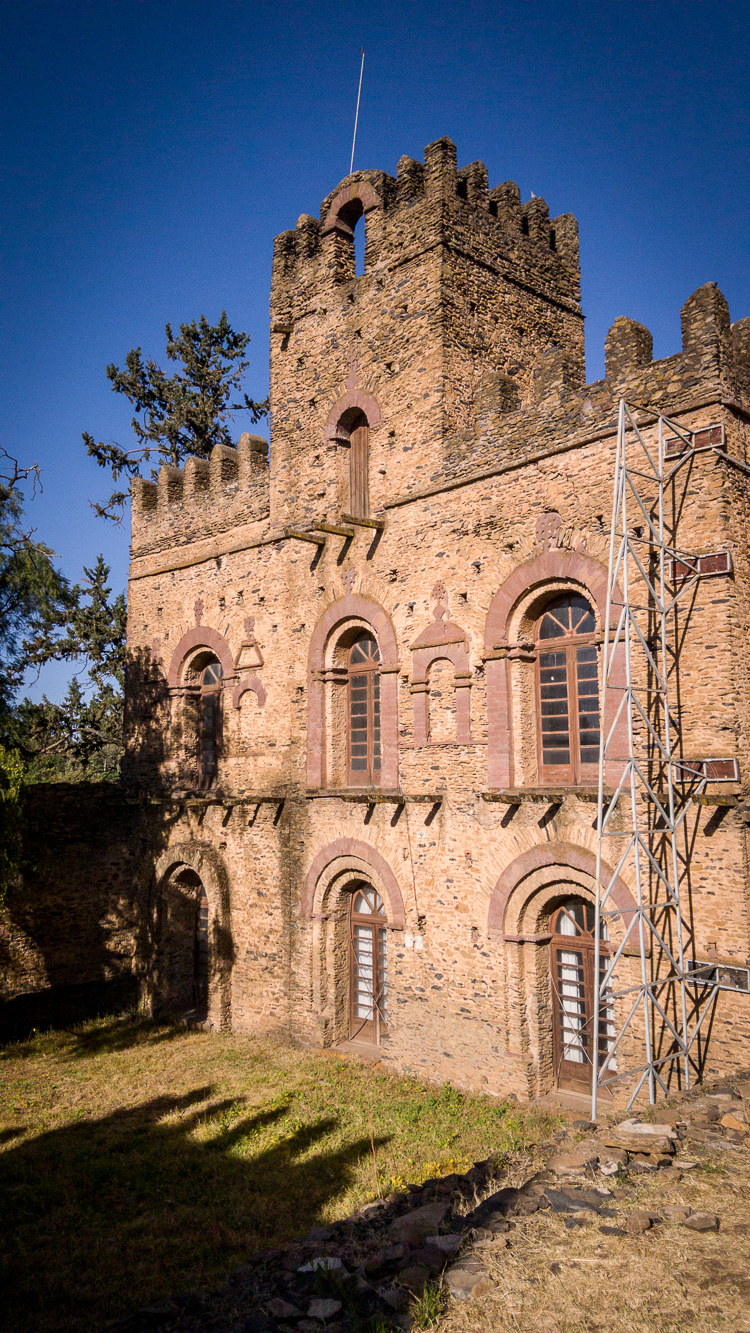 Not all of the buildings are connected (at least anymore) and that’s Mentewab’s castle at the end. It stands by itself a little past the lion cages.
Oh yeah, and apparently the site held actual lions until about 1990.

When a lot of people think about African countries, they think of huts and not castles, they think of a continent where history has been forgotten because there aren’t big enough monuments to hold the memories and Gondar might make us reconsider that image.

However, that’s not the point I’m trying to make here. In some ways, Ethiopia confirms stereotypes of African countries and in other ways it absolutely breaks them. Ethiopia has grandiose structures, conflict, welcoming people, and a culture that can be difficult to crack. It has parallels to my own culture and upbringing while there’s also a lot of things I know I will never connect to. In short, it’s complex and I wish more people could come and experience it, because one thing it isn’t, is a shithole.

Spring Cleaning – Playing Catch Up with Haikus
Scroll to top